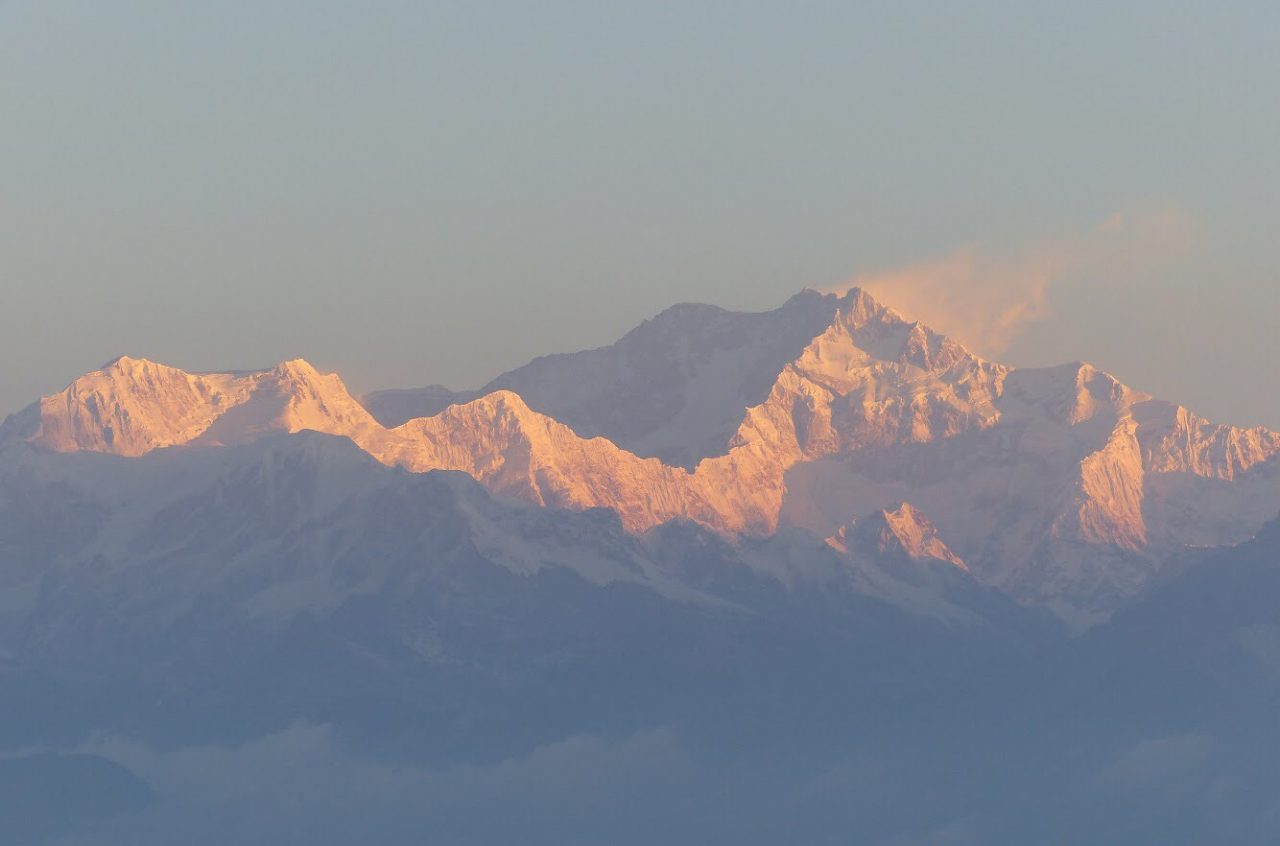 I woke up at 5 am and headed for the beach. As the last moment of my stay in Kanyakumari I wanted to witness a puja – the ritual of God-worshipping by the local monks.

I was amazed to see so many people at the beach at such an early hour: monks, monks-to-be (students), tourists, locals, on-lookers, lights around. In addition, the two monuments in the sea were also lit up in this still dark hour. All this created a mystic atmosphere. As part of the puja the monks started entering the sea. I am not a religious person, but it was a fantastic feeling to become an indirect accomplice of the event. 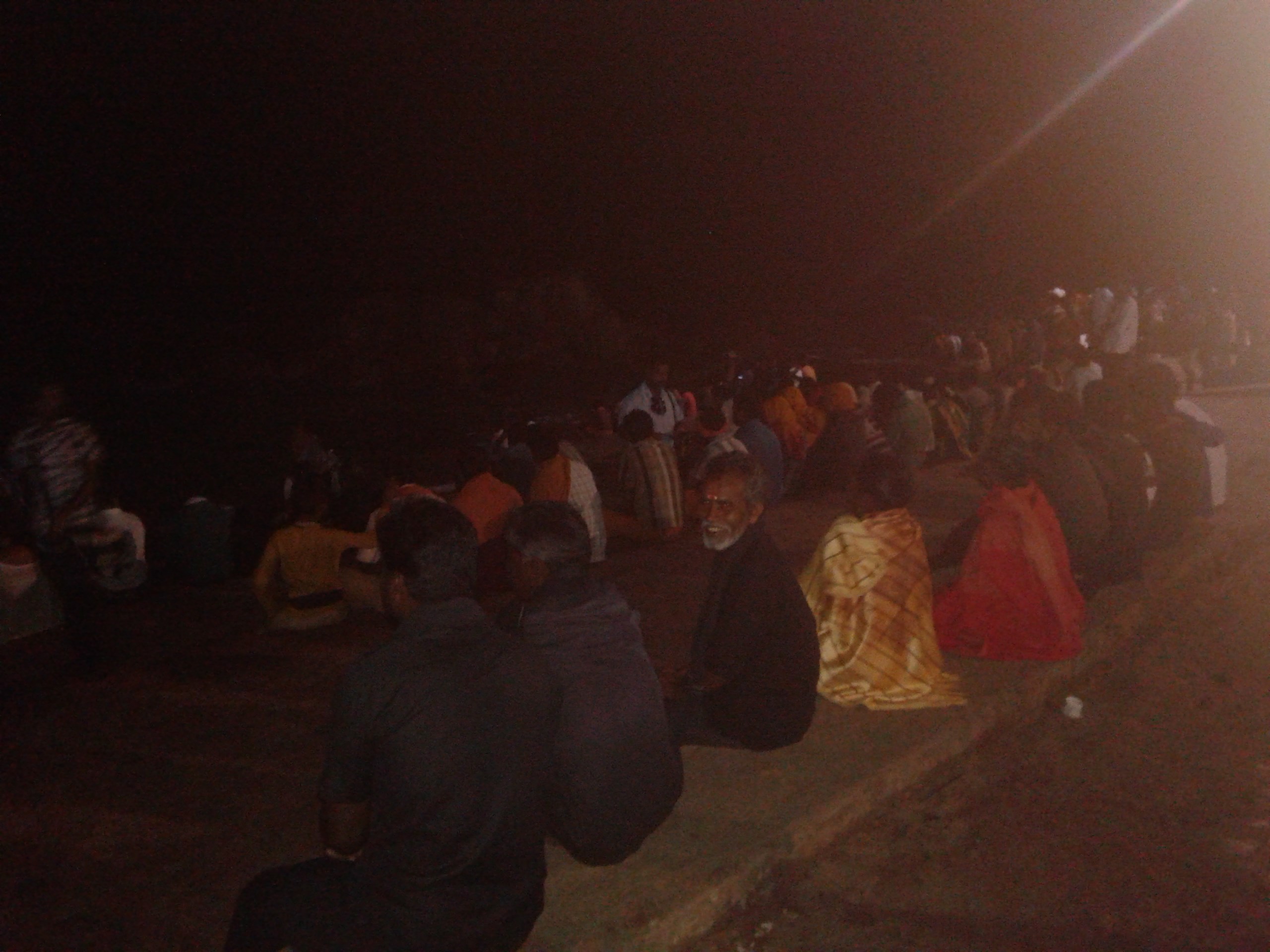 I went to the bus station to catch the 6 o’clock bus to Varkala, the state of Kerala. At the station the driver told me there was a change, and the bus left at 4.30. He could take me instead to Trivandrum, the state capital, where I could make a transfer. And off we went.

I’ll never forget that bus ride. There were only three people in the whole bus for the first hour or so: the driver, the conductor, and myself. I took a front seat next to the driver for a better view. The driver and the conductor were talking loudly in their super-fast language; the traditional Indian music was turned on to to the maximum volume; the bus produced its usual series of horns defying all decibel levels. All this cacophony of sounds, smells and hilly views passing by made the trip unforgettable. 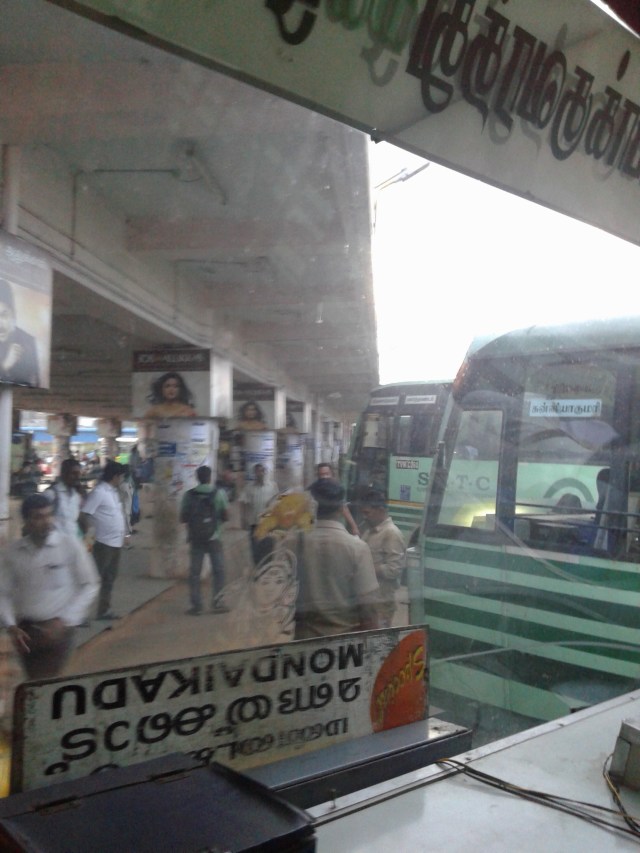 I also noticed that direct impressions in India are received simultaneously via three channels: visual, sounds, and smell. Perhaps that’s why the impressions are so vivid. Or at least that’s the scientific point of view.

At Trivandrum’s bus station I had my share of tea with a fried banana, and continued my quest for the bus to Varkala. I was advised to take a ride to another town instead, from where there were buses to Varkala every 5 minutes.

I followed the recommendation and finally arrived at Varkala around noon. The last bus ride was an adventure too. It was literally a metal box on the wheels, with a cord-system operating the door 🙂 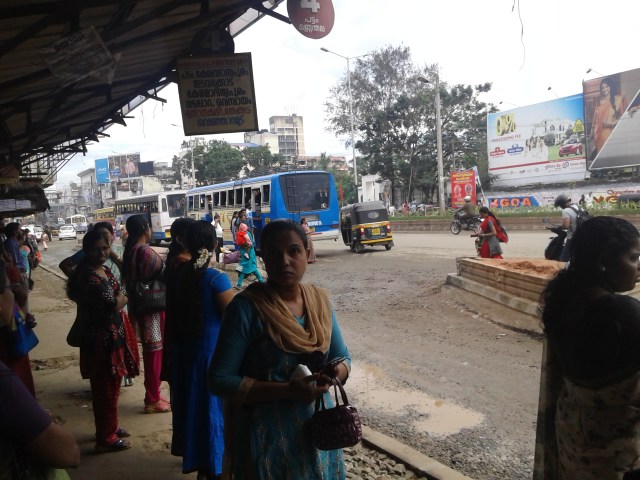 Passengers waiting at the bus station of Trivandrum, the capital of Kerala state 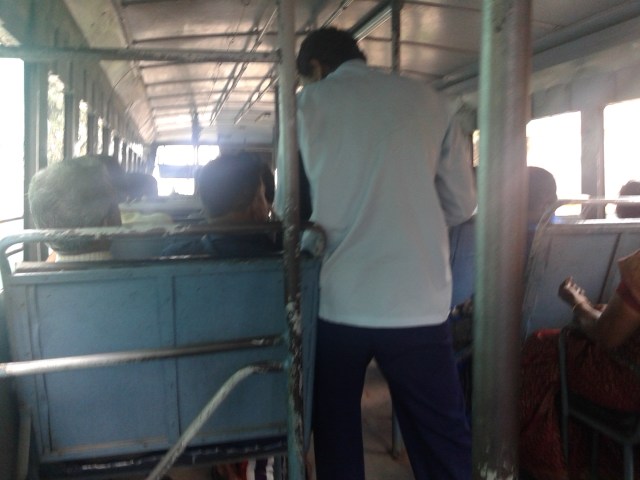 The metal box on the wheels 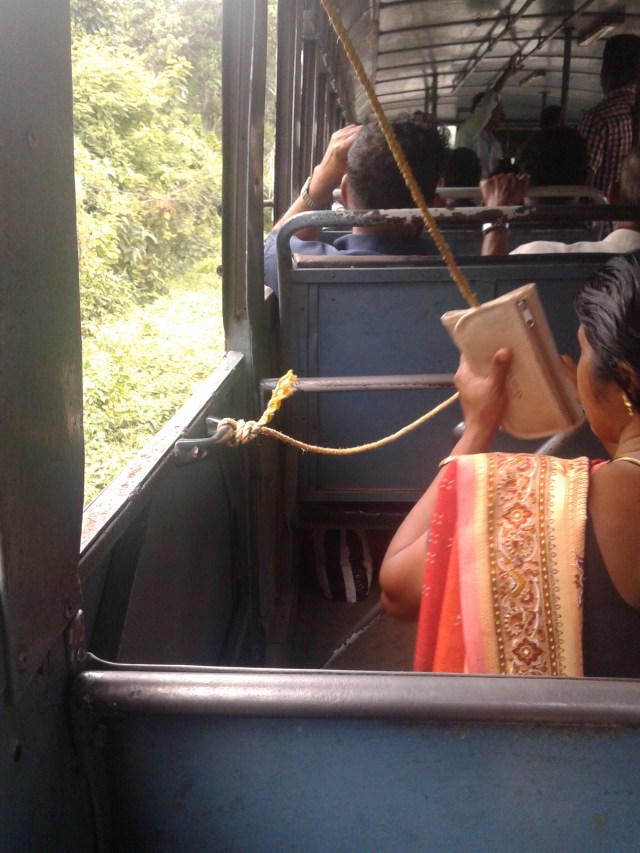 And this is how the door opens and closes 🙂

Upon arriving it took around 30 minutes by walk to get to the beach. Along the road there were many smiling schoolchildren passing in cute uniforms, but I was already tired and lazy to take out my camera. 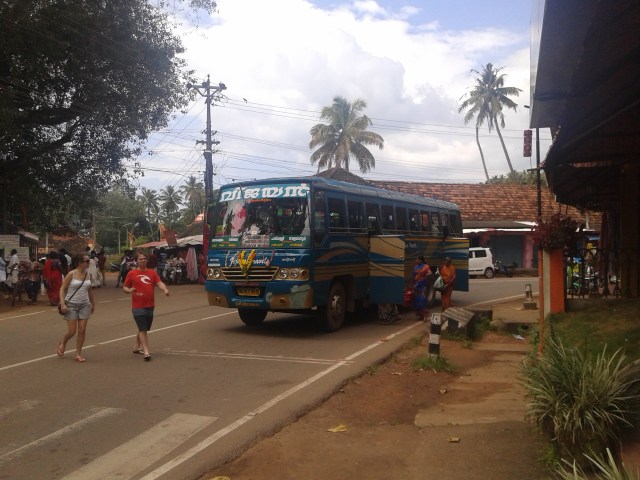 The first colorful bus I encountered on the way to the beach.

I knew where the beach was as I asked several times, but when I saw a non-Indian guy walking in the same direction, I felt like approaching him. Eventually Nil from Israel showed me a fantastic and very cheap place where he was staying. So again I saw it was easy to “catch the flow” as long as you follow your intuition.

This was the truly first decent beach I’ve seen so far. I’ve seen others before, but they were dirty and not so scenic. Here there is sand, sea, not hight waves, cliffs – all in all, beautiful. 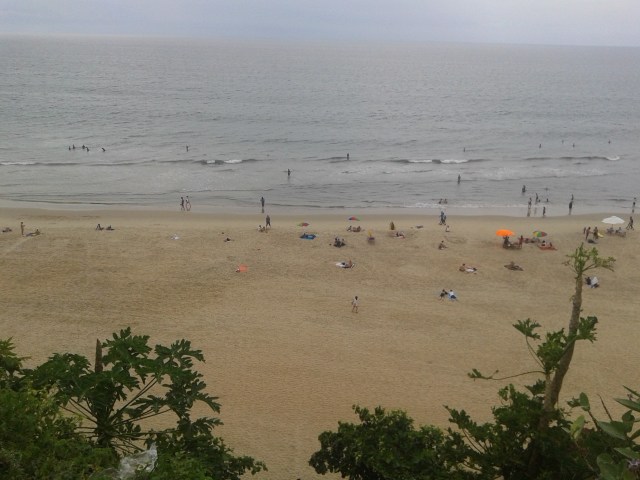 Varkala beach: view from the cliff 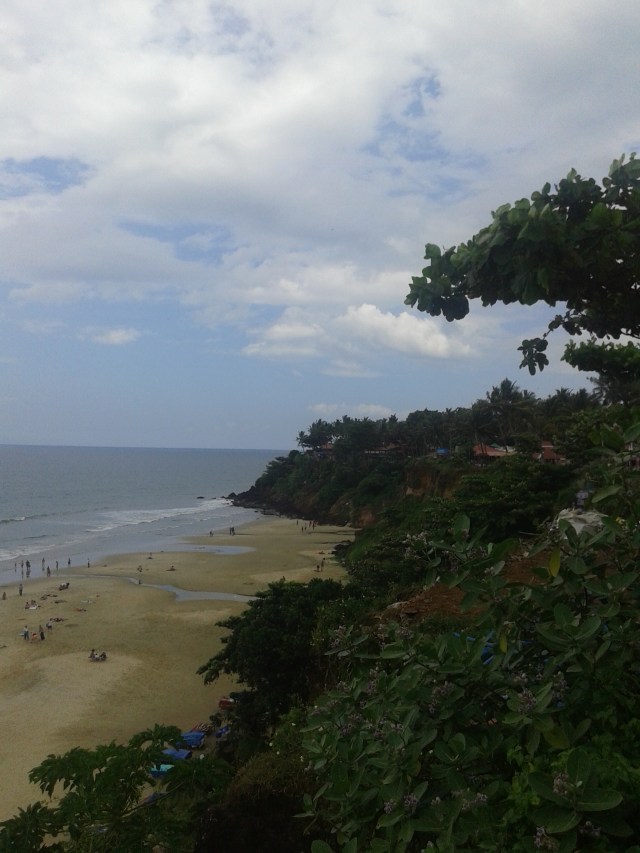 The dormitory – Shiva Garden – turned out to be a cool eco-style place with cute sports and leisure “facilities” and laid-back atmosphere. I stayed with 8 other people on the roof, the first place like this so far, and it was truly enjoyable. 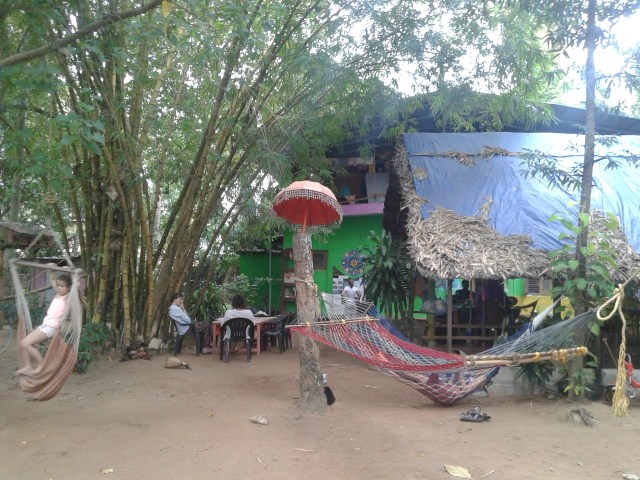 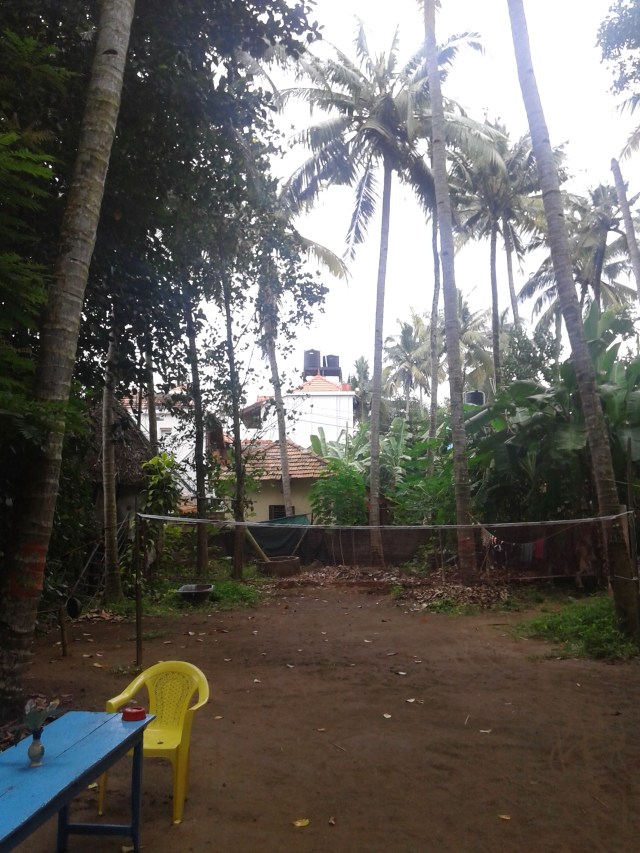 Sport facilities include a volleyball ground, a bar with weights, and a strength bar between the trees. 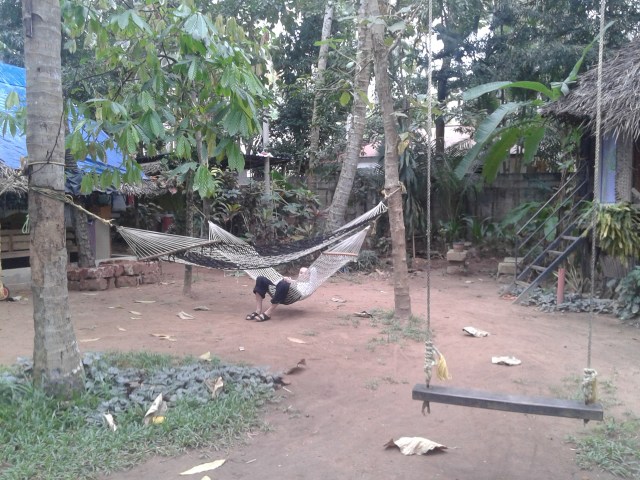 4 hammocks are available for chilling out. 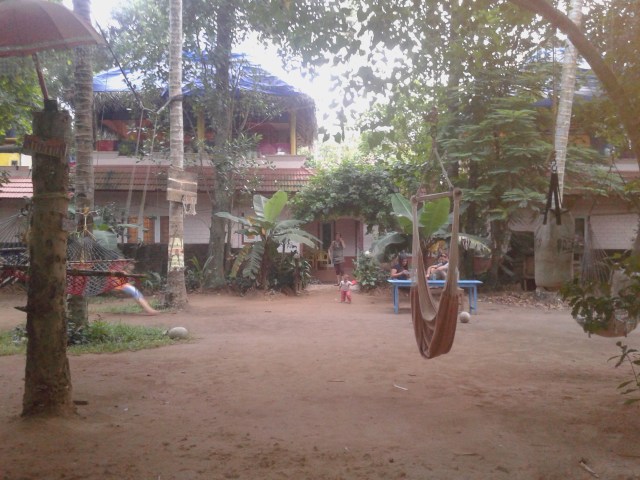 Cool swings are there too. 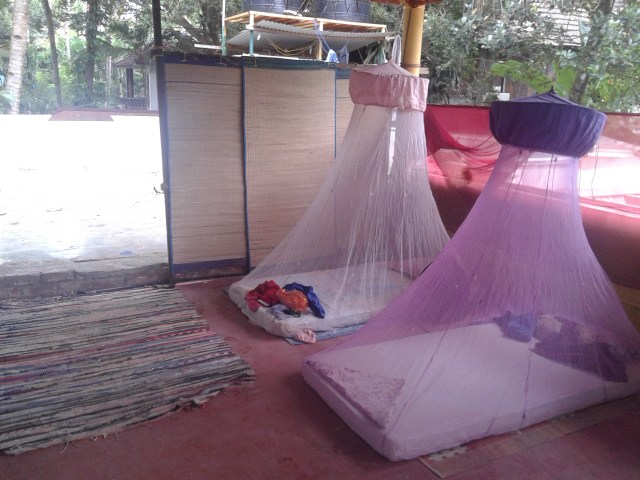 My dormitory lodge on the roof terrace 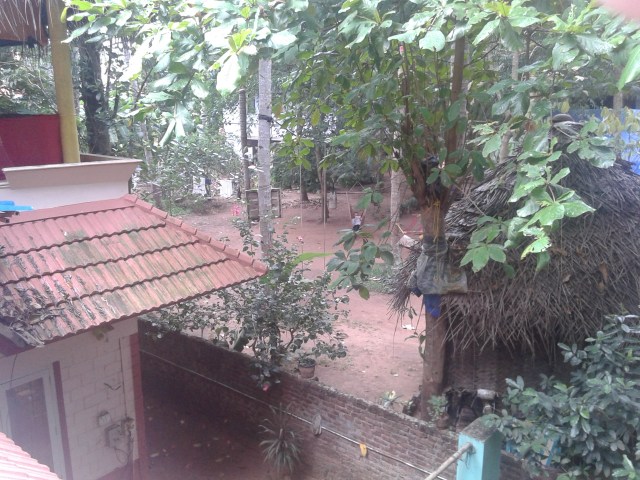 View from the roof terrace

After having a late lunch at a restaurant across the road, making some new friends and finding out about yoga classes, my neighbour Vladimir from Russia and I went to the beach.

Swimming in a warm sea in December isn’t compared to anything. The Arabian sea joins the Indian ocean, so my dream to swim in the ocean came true :). 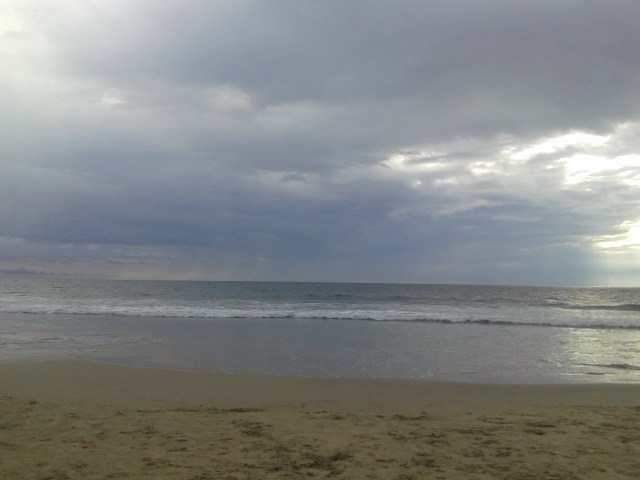 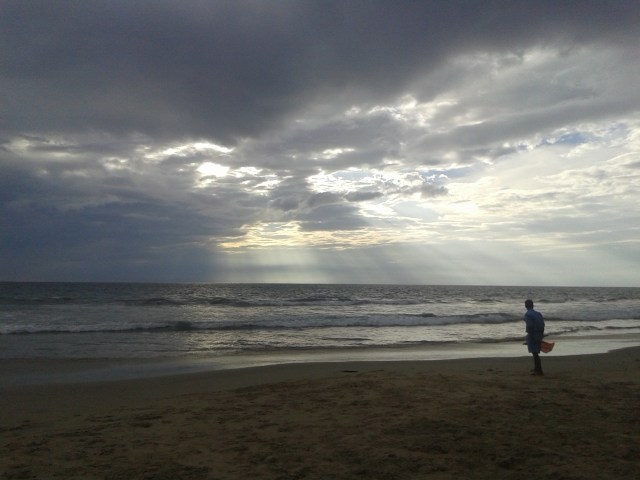 The sunset is coming soon.

In the evening I was attacked aggressively by mosquitos. So I bought a nice long-sleeve shirt and trousers at the market nearby, and went to the famous 200-year-old Janardanaswamy Temple, a Vishnu temple also known as the Varkala temple. At the end I had my vegetarian dinner at a very local place just opposite the temple. 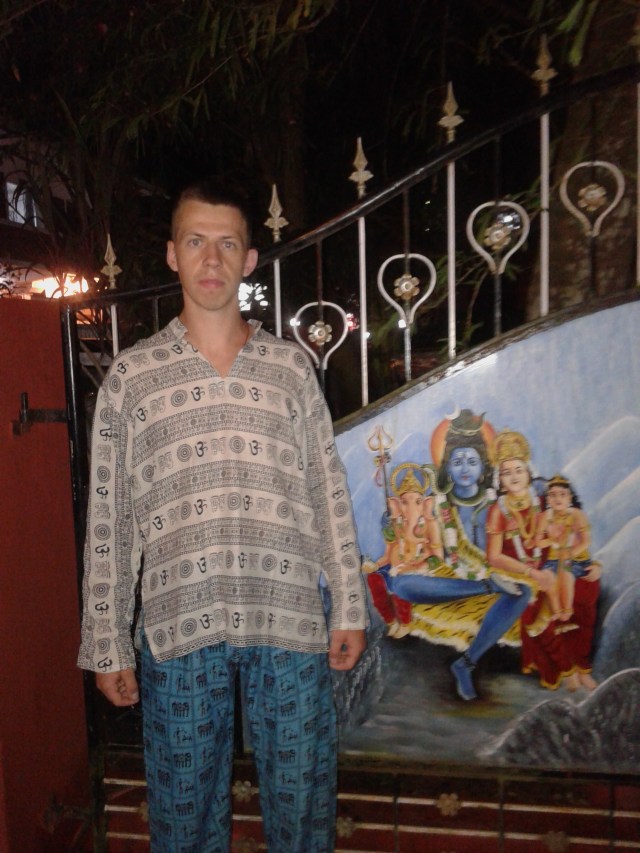 Heading for the Varkala Temple

I already realized that it’s better not to make firm plans in India. This country knows better what you really need. So was today. I planned to stay at Varkala Beach 1 day max, but the chilling environment of my lodge and the beauty of the beach with the cliffs changed my mind. I feel like spending a few days here.